Blockchain - The Future of Supply Chain 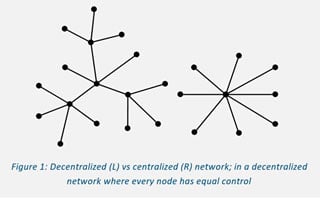 Blockchain technology, while in its infancy, has quickly become a highlight in cryptocurrency, smart contracts, and IoT integration.

Cryptocurrency, simply explained is a reward given to a node when it approves a transaction.  It does not exist physically. According to Coinmarketcap.com, as of December 2017, there are around 1,375 ($800B Market Cap) diﬀerent virtual coins that investors can invest in.

Cryptocurrency is paid to the “miners” that ﬁrst solve a set of equations and in the process verifying the transaction. This process is referred to as “proof of work”.

Another way of veriﬁcation is known as “proof of stake” where the preference of validation is given to a miner with higher existing cryptocurrency. This method is less resource dependent.

Bitcoin is the cryptocurrency with the highest market cap and the most advanced followed by Ripple and Ethereum. Most of the cryptocurrencies are backed by a blockchain technology with diﬀerences in its uses.

Smart Contracts help you exchange money, property, etc.  in a safe and easy way while avoiding the middle-man costs. Blockchain technology in smart contracts deﬁnes the rules of the contract and makes sure transactions go through, only when every side of the contract abides by these established rules.

Smart Contracts are an excellent example of leveraging blockchain in a traditional supply chain. Smart contracts embody a higher level of complexity of terms which can react to an unexpected and unlikely situation.

It would increase the need for storage and auto-processing of larger volumes of data, to monitor minute details of contracts. Blockchain or distributed record can be used to process and store such larger volumes of data with eﬃciency and security at a lower cost. Cryptocurrency Ethereum is the most widely used crypto to create smart contracts.

Blockchain packaged with IoT can solve the long-  standing problem of eﬃcient traceability in an end to end supply chain. In the traditional supply chain, traceability is often limited to few links backward in the chain. IoT backed by sensors can be used to link physical world to the digital world. It can help us collect, communicate and analyze data automatically.

Automated processing results in a higher volume of data, creating a concern for integrity and cost of handling, such as large volumes of data. Blockchain can be utilized   to hold data in distributed ledger hence increasing the availability and integrity of data at a much-reduced cost to all the parties involved in the end to end supply chain.

CGN Global has done extensive research on current supply chain trends. In the past, CGN has worked on projects to improve the traceability of a product’s chain of custody and has the tools and expertise to solve problems using blockchain technology.